Home News What are the Effects of Dispersion Stability Breakdowns
July 18, 2018

What are the Effects of Dispersion Stability Breakdowns

A dispersion is considered as homogeneous if its dispersion state is the same throughout the whole volume. The stability of dispersions refers to their long-term integrity and ability to remain in the state they were initially formulated. By remaining as close as possible to its initial physical state, a formulation is ensured to satisfy the end-use properties it was initially created for. Because complex formulations are unstable by nature, apparent dispersion stability can only be evaluated by the time that the dispersed phase remains suspended.

Dispersion stability of functional liquid dispersions such as emulsions, suspensions, and foams must be studied to determine their aging properties. Assessing the product’s shelf life is a critical measurement that often relates to monitoring the onset of migration phenomena (creaming, sedimentation) and particle size evolution (aggregation, coalescence properties). This article will explore and define these phenomena. 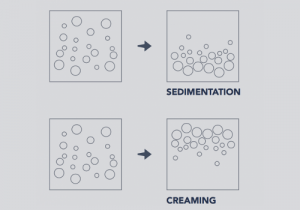 Particle migration is the buoyant or non-buoyant migration of dispersed phase media in a solution. In a nutshell, it depends on whether initially dispersed particles float to the top of the container or settle at the bottom. This is typically dependent upon particle size and density, and the viscosity of the liquid phase of the solution. Any variation during the aging of one of these parameters will influence the dispersed phase migration and thus dispersion stability. 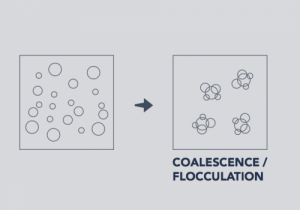 Whereas creaming and sedimentation refer to a collective or global phenomenon, coalescence describes the tendency of suspended media to reassemble and form larger masses. This may occur between media of the same composition and radically, often irreversibly, changes the macroscopic condition of the dispersion. As a consequence, these still homogenous mixtures are often no longer suitable for the purpose.

Agglomerates are particles made of smaller particles, called ‘constituent particles’ (i.e. morphologically identifiable). In agglomerates, the constituent particles are only ‘weakly’ bound (as opposed to fused constituents of aggregates). Particle agglomeration refers to the agglomeration potential of dispersed phase media in a colloidal system. Intermolecular interactions (Van der Waals; electrostatic, depletion…) can cause solid particles to pull together and form assemblies or clusters that significantly impact the stability of the dispersion and reduce product efficacy. Unlike in the case of coalescence, agglomerated particles are still distinct and do not ‘fuse’ together, however, the pulling forces hinter break the clusters. Often, if ever, a strong mechanical solicitation is required to recover to the initial dispersion state.

Dispersion stability and homogeneity monitoring are complex as multiple conditions must be analyzed to determine long-term integrity under a myriad of influencing agents. As maintaining the functional properties of a formulation is strongly dependent on the dispersion stability, it must be assessed at the early stage of product development. Physical stability can be advantageously assessed thanks to static multiple light scattering techniques (SMLS) with minimum sample handling or user intervention.

At Formulaction, we offer a full range of SMLS-based devices – the Turbiscan range-that requires no sample preparation for providing quantitative stability analysis up to 200 times faster than conventional tests. If you would like any more information, please do not hesitate to contact us.